So, Hope loves teenie bopper magazines. LOVES them! Seriously, whenever she finds them in a store, my girl will grab a few and plop down in the middle of the store floor and commence to getting her celebrity news fix. I have to remind her that at 12, perhaps getting comfy in the store like that isn’t really appropriate unless we’re like at Barnes and Noble where there are some couches.

I get it. I went through a phase in the last decade where reading OK!, Life & Style and Star brought me loads of entertainment. I traveled a lot, and airports seemed to get the new rags first and I would load up while on the road and thumb threw them on the plane. It was a guilty pleasure. So, while I’m over it, I get Hope’s desire to see what’s going on with all the young celebs running the streets.

About a month ago, she asked me if she could put the 37,000 posters that come in each of her magazines on the wall. Ok, sure, why not. It’s your room. She was delighted; apparently her foster placements didn’t allow her to put up posters and help make the space hers. Meh, it’s a poster, no biggie, go ‘head girl, get your celebrity scope on.

And then she plastered the wall, nearly ceiling to floor. And I helped. And I was perplexed when I stood back and looked at all the little eyeballs staring back at me. 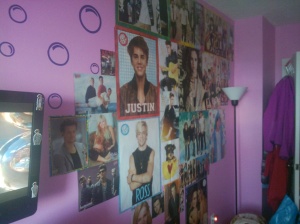 There are even more posters that didn’t make the snapshot!

Are there really no brown and black folks doing kiddie pop? Ok there are two brown girls in a couple of random girl groups that I’d never heard of (truth: Other than Bieber, Gomez, Grande and Mahone, I hadn’t heard of any of the kids plastered on the wall). But the lack of visual diversity gracing the wall was (is) jarring to my senses. Yes, yes, I know that Selena and Ariana are Latinas, but a quick glance at the wall doesn’t allow you to really take that tidbit of info in and process it. At least little Ariana drops some Spanglish lyrics in her songs…

There aren’t any 2014 versions of little Tevin Cambell? No B2K? No New Edition? #youhavetocountmeout No BoyzIIMen? #eastcoastswing No Monica? No Brandy? #theboyismine? No Kris Kross #makeyawannajumpjump? No Urshur (Usher—I can’t stand all that extra R in the pronunciation!)?

Has young “urban” pop just fallen off the sceen? Really?

I thought I was only bemoaning the ever declining state of hip hop, what with all the hypersexualized, drug glamorization and poor lyrical prowess out there. Save a few true artists putting in work out there, hip hop just makes me shake my head these days. I cringe sometimes when Hope is reciting some songs and then there’s a 4 to 8 beat pause when she’s skipping over the foul language. #youbettanotsaythatinthishouse

But now, I also see the absence of young teenie boppers of color too.  Does that mean that, well, that’s not the type of music “We” make anymore. We make rap music or when we’re much older, we make R&B music and some of us will make Gospel and some will rock Neo-Soul. But we aren’t really doing youthful, bubblegum pop music? I can’t imagine that there’s a dearth of talented, camera ready brown and black kids out there? So where are we?

Back when jheri curls were fly.

Hope wants to be a singer. She is talented musically, but singing probably isn’t her strong suit; her strengths lie in percussion. I can see it, but she can’t yet. But she still fancies herself a future singer. I wonder what subtle impact, if any, does not seeing a representation of herself on the wall means. Does that mean she’s not even going to think about singing bubble gum pop? Does it mean she’s not going to be on the Disney channel? Does it mean that she’s going to skip right over and sing hooks on the latest Little Wayne Lollipop song, because well, that’s what brown kids do? Or gasp…just be in the video? (Hey, not bashing the ladies in videos, everyone’s gotta eat, but I’m going to be pretty transparent here and disclose that one of my goals to keep my kid out of clear heels in the club or on the video set, ya feel me? I want something different for her.)

Some folks will think I’m making too much of this. But there’s a huge body of research out there on the impact of not seeing yourself represented in the media. It’s not good. Sure, folks overcome it, but those folks are the exception and not the rule. I’m losing sleep over many other, more important things as Hope continues to get settled with me, but there’s something about this wall of posters that doesn’t really include any images that look like Hope…there’s something about it that bothers me.

She’s young, she’s impressionable. She believes every stinking thing in these tabloids—the good, the bad, the ugly. She’s not particularly discerning. She’s declared on some other things that “we” (Black folk) don’t do stuff because she’s never seen it; so why would she believe brown kids like her are doing bubble pop music if she’s not seeing it?

Am I really just going to have to push more youtube videos to teach her that NSync and Backstreet Boys weren’t the only games in town back in the day? (Side note: if she asks me if the members of New Edition are still alive or have they died from old age one…more…time…)

I just wonder where the brown and black teenie bopper pop stars are.

I'm a single Black professional woman living in the DC area. I adopted a tween daughter 7 years ago, and this blog chronicles my journey. Feel free to contact me at adoptiveblackmom@gmail.com, on Facebook at Adoptive Black Mom, and on Twitter @adoptiveblkmom. ©www.AdoptiveBlackMom.com, 2013-2021. All rights reserved. (Don't copy my ish without credit!) END_OF_DOCUMENT_TOKEN_TO_BE_REPLACED
This entry was posted on Saturday, May 3rd, 2014 at 4:58 pm and tagged with adoption, Adoption Blogs, Adoptive Tween Parenting, African American Adoption, African American Parenting, African American Single Adoptive Mom, Teen Popstars, Tween Parenting and posted in Other Stuff, Tween Parenting. You can follow any responses to this entry through the RSS 2.0 feed.
« About Last Night
The Struggle is Real »

These are the adventures of one family in foster care and adoption.