With the decision now made now there’s all kinds of stuff to deal with. I need to get her enrolled in the new school, unenrolled from the new school, I need to reach in my purse and figure out the financial part of this investment and I need to help Hope figure out what she’s going to do with her hair while she’s away. More on that later because it’s a doozy.

As Hope was going through the motions of her decision last weekend, one of the conversations that we had centered around how there’s no perfect decision. Most decisions have an element of bitter that goes with the sweet. In this case, going to the new school meant that she would be leaving her marching band, not going to the band competitions with her bandmates, leaving the one or two friends she had behind. The trade off was being in a better academic environment with a band that does appearances in big parades that are sometimes on TV.

I thought that we would have a bit of time before the bitterness of her decision made itself known, but seeing as we adults can sometimes just be trash, the bitter taste was nearly immediate.

I decided that I would not take Hope out of her home school until the contract had been signed for the new school, because, you know I have some sense. Also, with Hope still enrolled in her home school she would be able to go to marching band camp this month. She would miss the last week of camp because we are going on vacation, but I looked at the vacation as a transitional time for her. In going to band camp, she would have a bit of time with her bandmates, she would be able to coach and mentor the new freshmen who were joining the band, and she would have some time with her favorite teacher (also her only black male teacher she’s had in 5 grades with me). I encouraged her to be mindful of her role in planning the marching since she would be a missing bass drum in a few weeks and the band needed to accommodate that.

Meanwhile, I was in communication with the guidance counselor and had made an appointment for the upcoming week to get the enrollment stuff taken care of.

Hope told her friends that she would be moving on to a new school and seemed to relish the attention around having made such a big decision. As she was finalizing her decision, she talked about it with her band teacher who flatly responded, “And?”

I know that Hope had really already made her decision by the time this conversation occurred, but I know that the response was hurtful and was probably that last little nudge for her to choose to move on.

By Friday morning I received an email from the band teacher asking if it was true that Hope would be attending a different school in September. After I told him yes, but I hadn’t started the enrollment process and no changes had been made, he responded by dismissing Hope from the marching band. He went so far as to ask me to stop what I was doing to come pick her up immediately because she couldn’t be on campus. 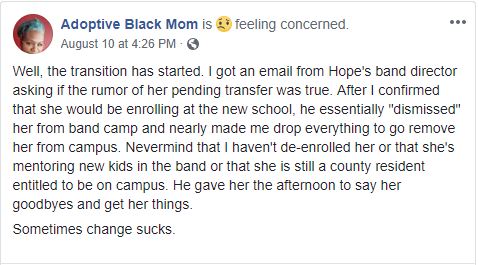 This teacher is Hope’s favorite teacher. He and his colleague teacher at the middle school have been the only stabilizing academic forces she’s had since she arrived here more than 4 years ago. He’s been one of few people of color and the only man of color teacher she’s had. He’s been kind to her, advocated for her and been genuine in his interest in helping her be successful.

This week he hurt her feelings and kicked her out of the one thing that has really motivated her during her high school years.

I refused to pick her up and told him that the humane and right thing to do would be to talk to her and give her a chance to say goodbye to her band friends. He reluctantly agreed.

By the time I picked her up she was In a bit of shock. As the hours passed and the grief set in, I saw her deny that he dismissed her, get angry because she felt like she was being punished, want to email to negotiate swinging by next week to help out with the freshmen without actually being “in band camp,” being really sad about how she was treated both when she mentioned it to him early in the week and after he knew she was leaving, reaching out to some newbies on snapchat to give advice for the drumline, and finally concluding that she made the right decision to go to a new school since it was clear that her teacher really didn’t give an ish about her anyway.

I’m grateful that she had therapy right after band practice, and I was shocked to see her go through the stages in mere hours. I was also proud that she never questioned her decision to go to the new school. I was so hurt to see her question the whole of her connection with her teacher due to this rejection. This weekend she’s wallowing. She might’ve moved through the grief stages, but she’s still grieving.

This is the bitter, and it kinda sucks.

I’m planning to have a “nice” (not really) chat with the band teacher, the counselor and the principal this week to talk about how this was handled. The reality is that it just didn’t have to be this way. I’ve looked up the regs and he was wrong since my daughter is still a student in the county, our intentions to withdraw, notwithstanding. Oh and in epic mixed messaging he told her she could attend camp for two more days—no doubt there’s some benefit to the band to having her there. I no longer trust that the invitation is for her benefit. The whole thing is just a mess with a lot of hurt feelings.

In the meantime, we’ve got a bunch of other lesser bitter stuff to wrestle with as we prepare for a rapid transition over the next couple of weeks.

I'm a single Black professional woman living in the DC area. I adopted my now adult daughter in 2014, and this blog chronicles my journey. Feel free to contact me at adoptiveblackmom@gmail.com, on Facebook at Adoptive Black Mom, and on Twitter @adoptiveblkmom. ©www.AdoptiveBlackMom.com, 2013-2022. All rights reserved. (Don't copy my ish without credit!) END_OF_DOCUMENT_TOKEN_TO_BE_REPLACED
This entry was posted on Sunday, August 12th, 2018 at 10:49 am and tagged with adoption, adoption and education, African American Adoption, african american adoptive parents, african american families, African American Parenting, Child Trauma, Education, Rejection, School and posted in Finalization Life, Lessons Learned, Parenting, Teen parenting. You can follow any responses to this entry through the RSS 2.0 feed.
« The School Decision
More Thoughts for Newbies »

4 responses to “The Bitter”